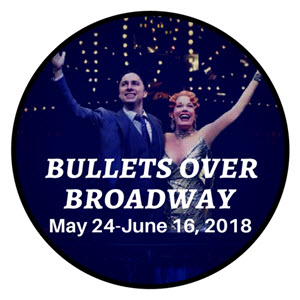 David Shayne is a straight-arrow playwright who plans to stand firm against compromising his work, but quickly abandons that stance when his producer finds a backer to mount his show on Broadway. There’s just one catch—the backer is a mobster who sees Shayne’s play as a vehicle for his ditzy, talent-free girlfriend. Throw in an aging diva, a savant hit-man, and a bevy of beautiful chorus girls, and this is one Broadway show that is sure to knock ’em dead.

Bullets over Broadway: The Musical is a love letter to the Golden Age of Broadway. Loaded with big laughs, colorful characters, and the songs that made the 1920s soar, this wildly entertaining show is bringing musical comedy back with a bang. Based on the screenplay of the acclaimed 1994 film by Woody Allen and Douglas McGrath, this six-time Tony-nominated musical features existing hits from the ’20s, including “Let’s Misbehave,” “‘Tain’t Nobody’s Biz-ness If I Do” and “There’s a New Day Comin’!”

Because our theatre is outdoors, we must sometimes cancel a performance if it is actively raining or if the conditions are dangerous. If your performance is cancelled due to weather and you already paid for your tickets, you have options:

Reschedule for a future performance of the current show or another show. Keep your ticket! Email boxoffice@summergarden.com to make a new reservation. Please provide your order number or seat numbers in the email.

Swap for gift certificates. Deliver your tickets in person, or mail them to the Ticket Office with a self-addressed stamped envelope. We’ll provide gift certificates good for any future performance.

Donate your tickets. Deliver your tickets in person, or mail them to the Ticket Office with a self-addressed stamped envelope. We’ll provide a receipt for your tax-deductible donation.